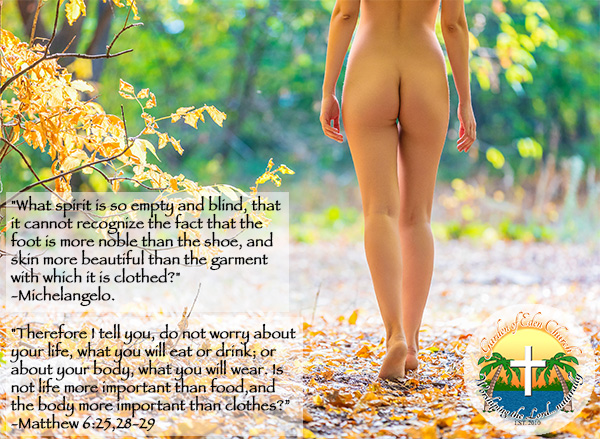 "The human body can remain nude and uncovered and preserve intact its splendor and its beauty... Nakedness as such is not to be equated with physical shamelessness... Immodesty is present only when nakedness plays a negative role with regard to the value of the person...The human body is not in itself shameful... Shamelessness (just like shame and modesty) is a function of the interior of a person."

1 Samuel 19:23-24
23 So Saul went to Naioth at Ramah. But the Spirit of God came even upon him, and he walked along prophesying until he came to Naioth. 24 He stripped off his robes and also prophesied in Samuel's presence. He lay that way all that day and night. This is why people say, "Is Saul also among the prophets?" (NIV).

Job 1:21
21 and said: "Naked I came from my mother's womb, and naked I will depart. The LORD gave and the LORD has taken away; may the name of the LORD be praised." (NIV)

Isaiah 20
1 In the year that the supreme commander, sent by Sargon king of Assyria, came to Ashdod and attacked and captured it- 2 at that time the LORD spoke through Isaiah son of Amoz. He said to him, "Take off the sackcloth from your body and the sandals from your feet." And he did so, going around stripped and barefoot. (NIV)

Micah 1:8
8 Because of this I will weep and wail; I will go about barefoot and naked. I will howl like a jackal and moan like an owl. (NIV)

Mark 14:51-52
51 A young man, wearing nothing but a linen garment, was following Jesus. When they seized him, 52 he fled naked, leaving his garment behind. (NIV)

Matthew 21:8
8 And a very great multitude spread their clothes on the road; others cut down branches from the trees and spread them on the road. (NKJV)

John 13:4
4 rose from supper and laid aside His garments, took a towel and girded Himself. (NKJV)

Romans 8:35-39
35 Who shall separate us from the love of Christ? Shall trouble or hardship or persecution or famine or nakedness or danger or sword? 36 As it is written:
"For your sake we face death all day long;
we are considered as sheep to be slaughtered."
37 No, in all these things we are more than conquerors through him who loved us. 38 For I am convinced that neither death nor life, neither angels nor demons,[b] neither the present nor the future, nor any powers, 39 neither height nor depth, nor anything else in all creation, will be able to separate us from the love of God that is in Christ Jesus our Lord. (NIV)

“They heard God walking among the bushes, which was an afternoon custom of his, and they were smitten with fright. Why? Because they were naked. They had not known it before. They had not minded it before; neither had God.
In that memorable moment immodesty was born; and some people have valued it ever since, though it would certainly puzzle them to explain why.
Adam and Eve entered the world naked and unashamed — naked and pure-minded; and no descendant of theirs has ever entered it otherwise. All have entered it naked, unashamed, and clean in mind. They have entered it modest. They had to acquire immodesty and the soiled mind; there was no other way to get it.
The convention miscalled modesty has no standard, and cannot have one, because it is opposed to nature and reason, and is therefore an artificiality and subject to anybody’s whim, anybody’s diseased caprice. And so… in lands inhabited by the innocent savage, the refined European lady soon gets used to full-grown native stark-nakedness and ceases to be offended by it. A highly cultivated French count and countess — unrelated to each other — who were marooned in their nightclothes, by shipwreck, upon an uninhabited island in the eighteenth century, were soon naked. Also ashamed — for a week. After that their nakedness did not trouble them, and they soon ceased to think about it.”
-Mark Twain, "Letters From The Earth."

"The fear that seeing naked people in some way harms children is not supported, however, by academic research. The small handful of studies on this topic in psychology and sociology have shown, instead, that children reared in an atmosphere containing family social nudity may benefit from the practice. If this is true, then proposed laws outlawing either social nudity in the home or children's participation at naturist (or nudist) settings are unjustified."
-Mark Storey in Children, Social Nudity and Scholarly Study.

It wasn't long ago that nudity was accepted in America. The YMCA used to have mandatory nude swimming, because it was more sanitary. Your fathers and/or grandfathers probably swam nude without a care. Many past Presidents and our Founding Fathers swam nude and even enjoyed nude recreation. In Biblical times nudity was common. Many people only had one set of clothes, which were hand made and expensive, so men and women worked nude. The Apostles fished nude. Jesus probably washed their feet nude and was probably crucified nude. Adam and Eve were created by God "naked and unashamed." But in one generation nudity became taboo. How? Over protective baby-boomers?
Read more at Vocativ

What is nudism all about?
"Born out of love of the sun, the fresh air, and of Nature herself, and born too out of a struggle with the gray repressive forces of prudery and Puritanism. Nakedness means freedom, and although dancing on a sun-kissed hillside with shorts on seems pretty similar to dancing with shorts off, there is all the difference in the world. It is as if your clothes take on the weight of your worries and concerns - they come to embody your defenses against the world, and if you feel confident enough, then taking them off evokes a powerful sense of liberation, of joy and freedom; and more than that - of innocence and of openness to the world."
-Phillip Carr-Gomm

"What spirit is so empty and blind, that it cannot recognize the fact that the foot is more noble than the shoe, and skin more beautiful than the garment with which it is clothed?"
-Michelangelo.

You can read more at Naturism - The Naked Truth, and at The Ethical Naturist.